New magazines: the lifeblood of the magazine industry

At least 4,730 new magazines launched in the US alone in last 20 years. Dr Samir Husni (aka Mr Magazine) outlines what it takes to launch a successful magazine in the digital era.

At least 4,730 new magazines launched in the US alone in last 20 years. Dr Samir Husni (aka Mr Magazine) outlines what it takes to launch a successful magazine in the digital era.

In any industry or profession, without new birth, products, ideas, or people, there is no growth. If you’re not growing, if you’re not introducing new blood to the mix of what you have, you’re dying incrementally. And the lifecycle and growth of magazines aren’t any different than any other lifecycle. Yes, magazines come and magazines go, but just because one magazine folds it doesn’t mean the entire print medium is dying.

And while in the last 20 years the number of consumer magazines in the US aimed at the general public has remained steady, averaging at around 7,000 titles, it should be noted that in those same 20 years we had at least 4,730 new magazines coming into the marketplace. And the reason I say at least, is because those were the ones that I was actually able to buy and collect ink on paper copies from.  My definition was and still is, “if it is not ink on paper, it is not a magazine.” And if I don’t have a physical copy of the magazine, it does not get added to the data on new magazines. There has always been an influx of new print hitting mailboxes and newsstands nationwide, ranging from a yearly high of 450+ to a low of 60 due to the onset of the pandemic in 2020.

Those new titles are the life’s blood of the magazine industry. And even if 70 per cent of those magazines have died, which is the survival average of new magazines after four years of publishing, the remaining provide a good chuck of the magazines in the marketplace.

Why am I talking about new magazines and the need to launch new titles aimed at different audiences?

What does it take to launch a new magazine and what are some of the steps to make sure it’s successful?

The most important aspect, based on my research, is that you have to find an audience. That’s number one. An audience who is willing and capable to pay the price of the magazine and the advertised goods in the magazine. The average cover price of a new magazine is inching toward the US$10.00 figure.

You have to be in the business of selling relevant, engaging content to an audience who:

The old business model of selling the audience to an advertiser to make money is slowly but surely heading to the history books. You must be in the business of selling content and creating experiences with the audience.

Nobody needs a magazine. Magazines are like chocolate. Nobody needs chocolate but once you start eating it you get addicted to it and you want more. Same thing with magazines. You have to create this relationship.

You have to provide me with something different. Something unique. If I can Google a question and find its answer, it doesn’t belong in your magazine.

So the process of starting a new magazine begins with an idea.

The very first thing you need to do if an idea comes to your mind is put it in writing. Ideas come by the dozen and are worth a dime. It’s the execution of the idea that sets it apart. So once you get the idea, once you boil it down to a very specific one sentence “this is what the magazine is going to be all about,” find the means and ways to reach that audience. Because the best ideas in the world, if they don’t have an audience, they are never going to go anywhere.

And believe in yourself.

The sky is not the limit. No, you are the limit! Believe in yourself because everyone is going to tell you “this will never work”.  And all the successful magazines in history were published based on ideas that folks were told their ideas would never work or no one would ever buy them.

For the last 20 years, new magazines have continued coming into the world just like their predecessors before them. For a glimpse at how the numbers fell in any given year, here is a chart that myself and my team put together of new launches that have frequency from 2001 until 2020.

As you can see, the numbers have been strong (stronger in some years), but even in 2020 with a pandemic raging, we had 60 new magazines to hit newsstands in the US. Nothing short of amazing.

And many of these from the last 20 years are still going strong as you can see from the different titles scattered in my blog.

And these are just some of the titles still engaging the audiences with excellent experience making and good content providing. The longevity of these magazines prove they still have viable, relevant, necessary, and sufficient content that audiences want.

So what are you waiting for?

Start putting your ideas on paper and let the fun begin. Magazine publishing, as one friend from The Netherlands once told me, “is believing.” And I do believe.

Do I hear an amen or two… 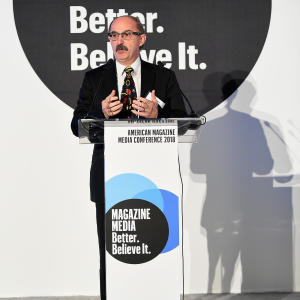 Dr Samir Husni, aka "Mr. Magazine"™, is the director of the Magazine Innovation Center at the University of Mississippi, School of Journalism. He is also Professor and Hederman Lecturer at the School of Journalism. Dr Husni is the author of the annual Samir Husni's Guide to New Magazines, which is now in its 25th year. He is also the author of Magazine Publishing in the 21st Century, published by Kendall Hunt, Launch Your Own Magazine: A Guide for Succeeding in Today's Marketplace published by Hamblett House, Inc., and Selling Content: The Step-by-Step Art of Packaging Your Own Magazine, published by Kendall Hunt. He is the editor of The Future of Magazines.