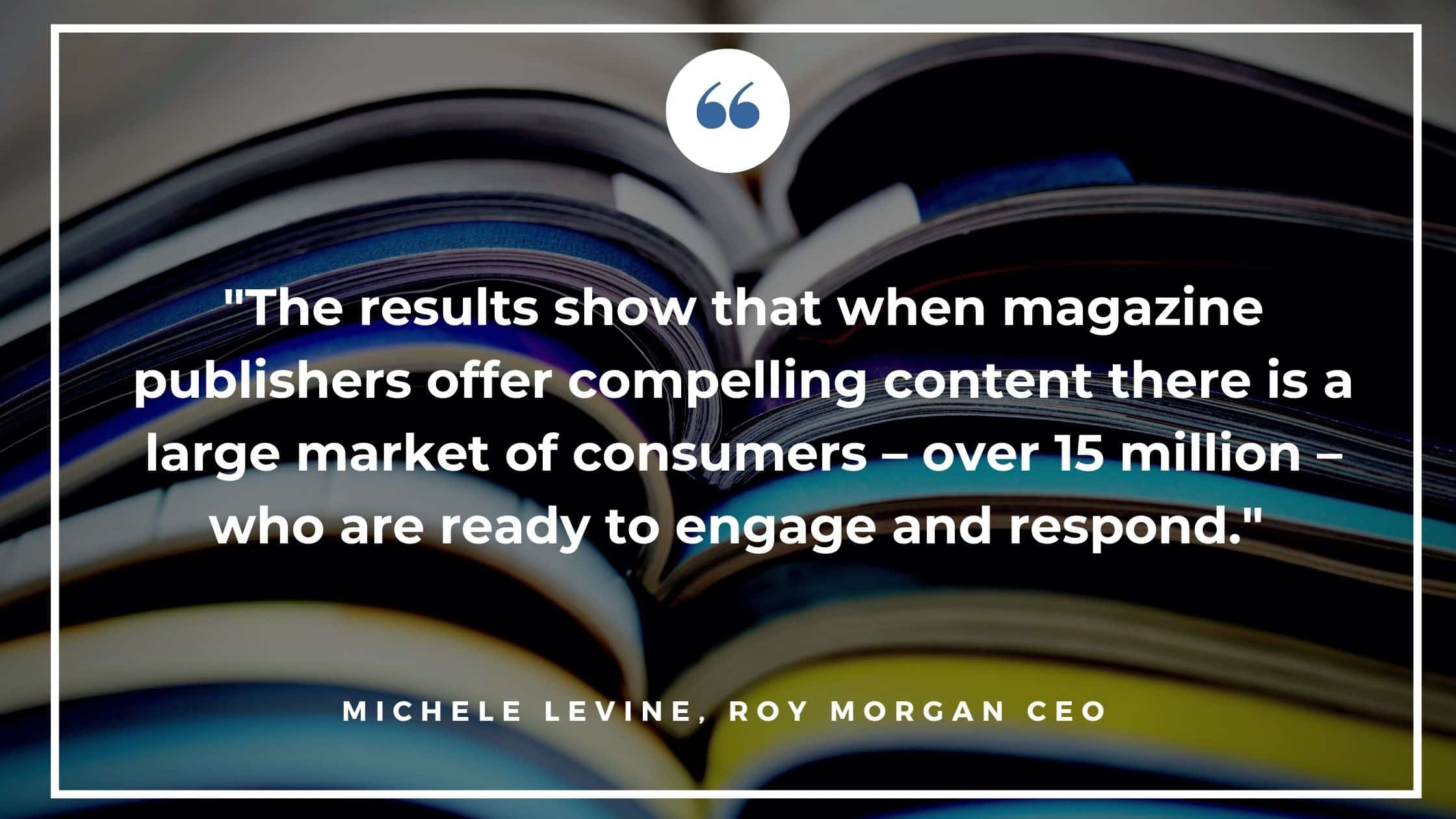 The “magic of magazines” has delivered a high level of engagement with consumers stuck at home during major city lockdowns around Australia, Roy Morgan CEO Michele Levine has said on the release of the Roy Morgan Readership report for the 12 months to June 2021.

Print readership of several leading magazine categories has increased significantly from a year ago, according to the Roy Morgan Australian Readership report for the 12 months to June 2021.

The stats are down 4 per cent and 2 per cent respectively from a year ago, but Roy Morgan CEO Michele Levine said that this is largely due to the closure or suspension of over 20 titles during 2020 as the industry grappled with the COVID-19 pandemic and the nation-wide lockdown.

Of the magazine titles that have continued, the report found that many have resonated with new audiences during a tough year and are thriving; with solid readership increases seen across many categories.

Levine said “Despite the ‘digital deluge’ of the last year it is print magazines which are clearly the favoured channel.”

Print readership of several leading magazine categories increased significantly from a year ago:

There were also impressive increases in readership for the magazine categories covering Motoring, TV, Sports, Music & Movies, and Motorcycles.

“The results show that when magazine publishers offer compelling content there is a large market of consumers – over 15 million – who are ready to engage and respond. Magazines have the ability to communicate complex messaging and with the massive reach of many magazines can deliver large audiences for advertisers.

Levin said: “Although the current lockdowns are frustrating, the experience from a year ago is instructive. After the lockdowns of 2020 ended Australians emerged with cash to spend that was saved up during the period when they were confined to their homes. The same phenomenon is likely going to occur again with consumers in NSW and Victoria forced to save money now that will be there to spend towards the end of the year and into the first half of 2022.

“This provides a clear opportunity to magazines to set the agenda for what activities, travel ideas, experiences and consumer goods those from NSW and Victoria will look forward to doing over the summer months when the current lockdowns finally end.”

Sports magazines also had a good year and more than doubled category readership, up by 134.6 per cent on a year ago to 441,000 on the back of strong performances from two golfing magazines.

Notably, and despite a heavily disrupted season, SEN’s AFL Record is still the most widely read magazine in the category with a readership of 200,000, an increase of 7.5 per cent on a year ago.

Five out of the six motoring magazines to increase their readership are Are Media titles:

Overall the Business, Financial and Airline magazines readership experienced a decrease of 4.7 per cent over the last year to 1,105,000 (5.2 per cent of the population).

Despite the overall decline, two magazines in the category did increase their readership over the last year led by Rainmaker’s Money Magazine which increased readership by 134.6 per cent to 244,000 as Australians increased their rate of saving to its highest levels since the early 1970s.

Also increasing strongly was Qantas Magazine (produced by Medium Rare Content Agency) which remains the most widely read magazine in the category with 367,000 readers, an increase of 41.2 per cent on a year ago.

Roy Morgan found that 12 of the Top 15 magazines increased their print readership over the past year as Australians looked for new activities to partake in with borders closed and travel options heavily restricted.

Are Media’s Better Homes & Gardens is Australia’s most widely read paid magazine with print readership up 3.5 per cent to 1,679,000 ahead of the publisher’s Women’s Weekly with a print readership of 1,475,000, an increase of 18.7 per cent on a year ago.

In addition, National Geographic retained an impressive print readership of 969,000 to be Australia’s third most widely read paid magazine.

In Australia’s Top 15 most widely read, the two magazines to have the largest increase in readership compared to a year ago have a home improvement focus:

Other magazines to increase in the Home & Garden category include:

Four magazines in this category made their debut in Roy Morgan’s readership report in 2021, including:

In the Food & Entertainment category, paid magazines with the biggest growth include:

Travel magazines to increase readership include:

Other magazines to perform strongly include:

Bunnings Magazine (produced by Medium Rare Content Agency) is the third most widely read free magazine and had a large increase in readership over the last year as Australians turned to home improvement and renovations due to the COVID-19 pandemic with readership increasing by a massive 40.3 per cent to 1,629,000.