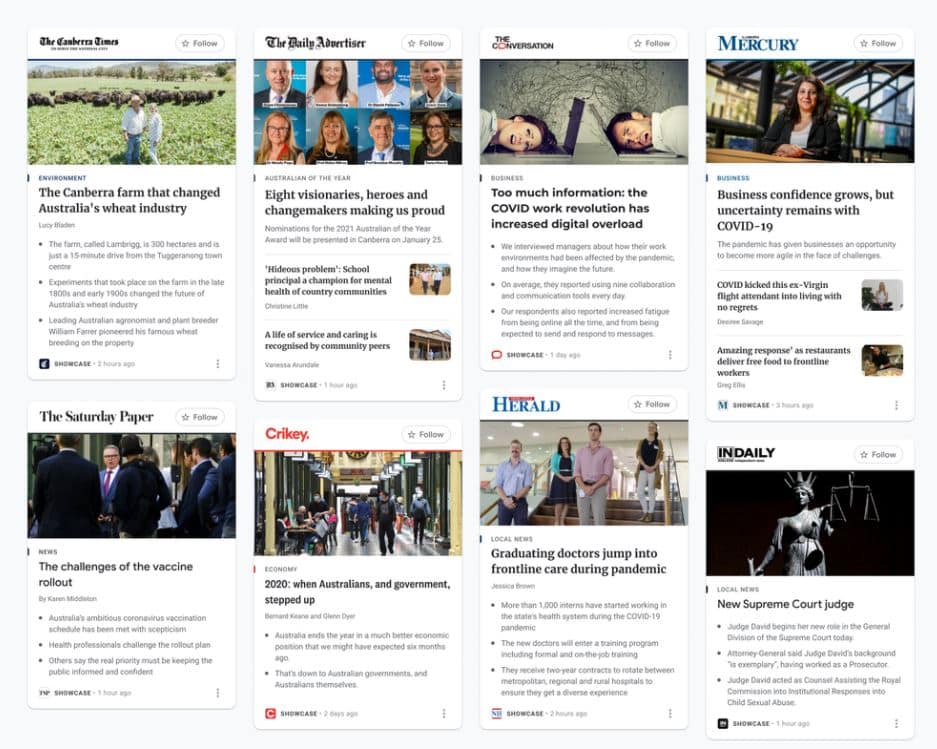 Google has launched its News Showcase in Australia with a “keen focus on leading regional and independent publishers given the importance of local information and the role it plays in people’s everyday lives”.

The News Showcase was originally planned to launch in 2020 but Google chose to delay its launch while it worked to “understand the impacts of the News Media Bargaining Code on partnerships and products”.

Instead, Google has chosen to launch the Showcase:

Launching the showcase, Google said that the News Showcase is “designed to bring value to both publishers and readers by providing a licensing program that pays publishers to curate content for story panels across Google services, and gives readers more insights into the stories that matter”.

How does Google News Showcase work?

The News Showcase presents branded ‘panels’ of participating publishers’ content, which will appear across Google News on Android and iOS, and in Discover on iOS. Google plans to include the panels in Google Search results.

Enhanced metrics will be available for publishers to view on Google Search Console.

Participating publishers receive a set monthly fee for curating their articles within the showcase. Google is also paying a fee for access to articles usually behind a paywall “so that readers can see the value of becoming subscribers and publishers can build a relationship with readers”.

Australian publishers that have joined the program include The Canberra Times, The Illawarra Mercury, The Saturday Paper, Crikey, The New Daily,  InDaily and The Conversation.

Google’s Head of News, Web & Publishing Product Partnerships (APAC) Kate Beddoe said that these publishers were among the first globally to sign up to the showcase product, providing early feedback on how the product could promote their journalism.

“Whether it’s on our new apps or our websites, via podcasts, social media, newsletters or the printed newspaper, we want the journalism of mastheads like The Canberra Times and Newcastle Herald to reach our communities wherever they are.”

CEO of Schwartz Media, Rebecca Costello, agrees: “This is a chance to take a leading role in putting quality journalism in front of people. It helps take the rigour of what we do at The Saturday Paper, The Monthly and 7am and connect it to broader audiences. It is one way of addressing the age of misinformation in which we live.”